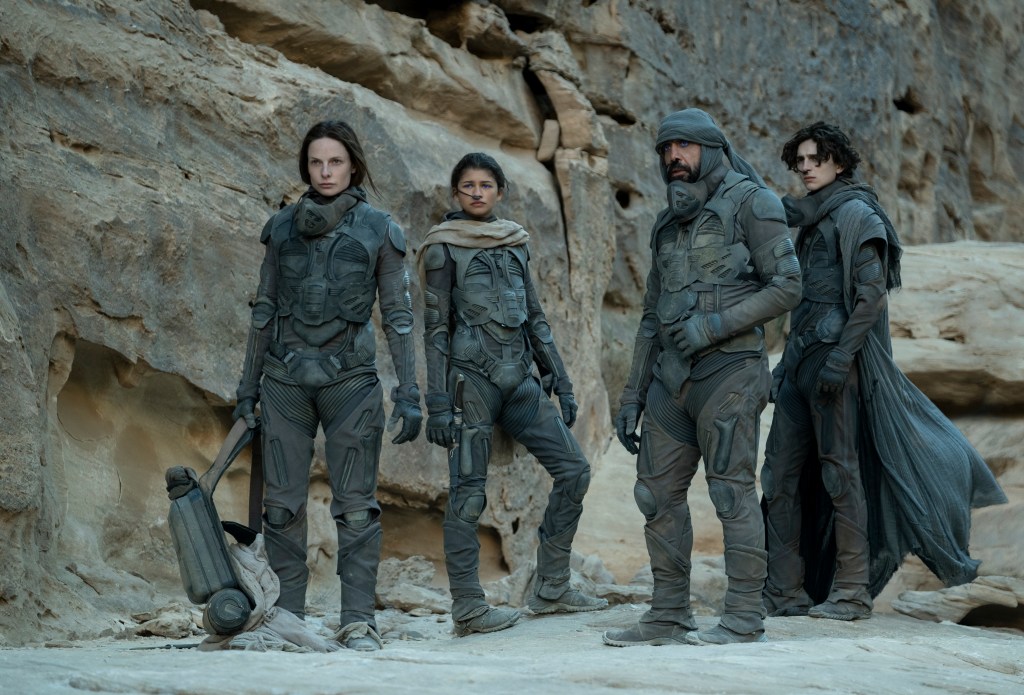 Streaming services are releasing a range of new content in October, including some of the highly anticipated films of the year.

Several of the season’s hottest movies will be available for a short time on HBO Max, while also premiering in theaters. This includes the sci-fi movie “Dune,” which has a star cast of Timothée Chalamet, Zendaya, Oscar Isaac and Rebecca Ferguson, among others.

The prequel to “The Sopranos” “The Many Saints of Newark” will also be available on the streaming service for a brief period this month. The film stars the late James Gandolfini’s son, Michael Gandolfini, as the younger version of the actor’s beloved character, Tony Soprano.

To celebrate Halloween, the 12th installment of the “Halloween” franchise, titled “Halloween Kills,” will debut on NBC’s streaming service Peacock this month, as well as in theaters. The film brings back many longtime actors from the franchise, including Jamie Lee Curtis and Nick Castle.

Here, WWD brings together eight films to be released in October 2021.

Starring Margaret Qualley, Andie MacDowell and Nick Robinson, “Maid” follows the story of a young mother who flees an abusive relationship and takes a job cleaning houses to build a better future for herself and her child.

“The Many Saints of Newark”
Stream on HBO Max October 1

The prequel movie “The Sopranos” will be released on HBO Max for a limited time this month, with the late James Gandolfini’s son, Michael Gandolfini, playing a younger version of his father’s beloved character, Tony Soprano. The film shows a young Tony Soprano growing up in Newark, New Jersey, at a time when rival gangs are emerging. The film also stars Leslie Odom Jr., Ray Liotta, Corey Stoll, Jon Bernthal and others.

Ahead of its Broadway debut in November, “Diana: The Musical” will release a filmed version of the musical on Netflix. The musical offers a dramatized version of Princess Diana’s life, focusing on her personal life and her strained marriage to Prince Charles.

Amazon Prime Video and Blumhouse Productions continue their collaboration this year for Halloween, releasing four horror-themed anthology films throughout the month. The films begin October 1 with the release of “Bingo Hell,” which tells the story of an elderly woman battling a mysterious businessman who takes over the local bingo hall, and “Black As Night,” which focuses on a teenage girl who fights a group of deadly vampires.

On October 8, the streaming service will then release “The Manor,” which focuses on a haunted assisted living facility, and “Madres,” which tells the story of a young Mexican-American couple who discovers a talisman on the ranch. run down that they have to move to.

“The guilty”
Stream on Netflix October 1

Jake Gyllenhaal stars in “The Guilty” as a 911 operator who tries to save an endangered caller. The film also stars Riley Keough, Paul Dano and Peter Sarsgaard.

The 12th installment of the “Halloween” franchise will debut in theaters and on Peacock this month. Jamie Lee Curtis and Nick Castle reprise their roles as Laurie Strode and Michael Myers, respectively, and other cast members include James Jude Courtney, Judy Greer, Andi Matichak and Will Patton, among others.

The horror film follows a student who works as a driver and is tasked with driving two mysterious women one night as they party in Los Angeles. He soon learns that women are vampires and finds himself stranded in the middle of a war between two tribes of vampires. The film stars Jorge Lendeborg Jr., Debby Ryan, Lucy Fry, Megan Fox, Sydney Sweeney, Alexander Ludwig and Alfie Allen.

The highly anticipated sci-fi film “Dune” hits HBO Max and in theaters this month following its premiere at the Venice Film Festival last month. The film is an adaptation of Frank Herbert’s best-selling novel and follows a young man who travels to the most dangerous planet in the universe to protect his family. The film stars Timothée Chalamet, Zendaya, Rebecca Ferguson, Oscar Isaac, Josh Brolin and others.

All you need to know about the movie “Spencer”

Who are the real characters in the movie “House of Gucci”?

13 new documentaries to watch in October 2021

19 TV shows, movies, and documentaries to watch in October 2021

The coolest movies to watch of October 2021

13 essential movies about the fight for women’s equality