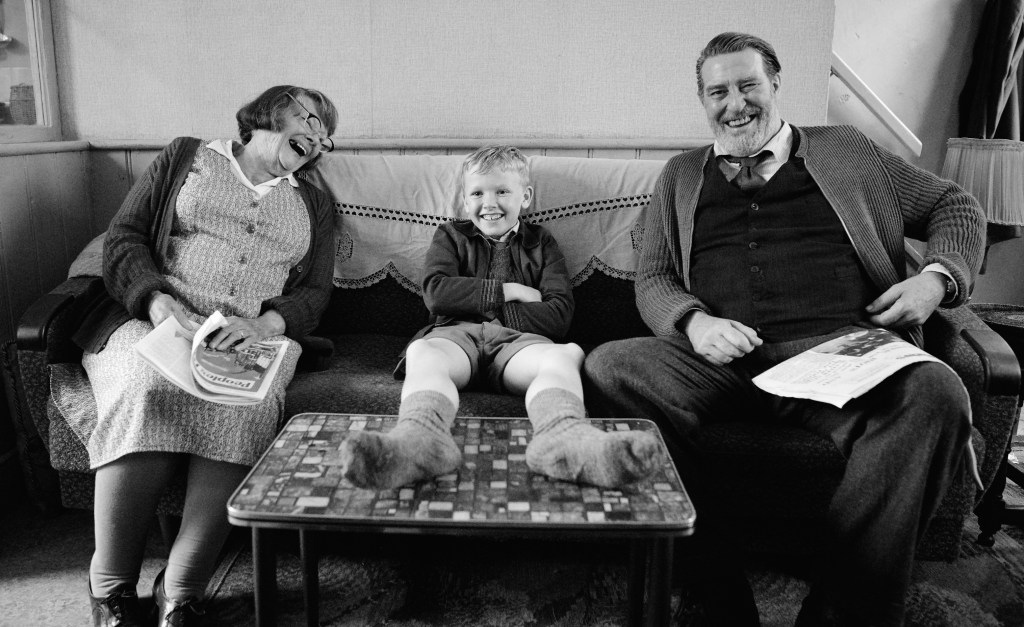 “Belfast” has Oscar bait written all over it

With the holiday movie season just around the corner, this week an Oscar nominee for Best Picture is making its way into theaters.

And in case you need another series to watch, there’s “The Shrink Next Door” starring Will Ferrell and Paul Rudd, which arrives this Friday on Apple TV +. Other interesting titles include “Mayor Pete” and “Beans”.

Here is our roundup.

“Belfast”: As a writer and director, Kenneth Branagh becomes nostalgic and sentimental but not cutesy for his touching semi-autobiographical account of his childhood during the unrest in the capital of Northern Ireland. Anchored around three beguiling performances – Jude Hill as young pal, Caitriona Balfe as his mother and Jamie Dornan as his father – Branagh’s memory of life in the violent era of the 1960s holds a beautiful soundtrack and superb black and white cinematography. One of his delights is how Branagh fills him with quick visual clues about Branagh’s future career, including flashes of a Thor comic book and the cover of an Agatha Christie novel. Above all, “Belfast” expresses Branagh’s heartfelt appreciation for community and family, including the love of two charismatic parents who manage to help everyone through these better and worse times. “Belfast” may be an idealized memory from the past, but it is rich in humor, heart, soul and, at times, haunted imagery. Branagh introduces Judi Dench, portraying Buddy’s grandmother, with the ability to appear in the movie’s deepest and most gorgeous scene, and he’s a beauty. The same goes for a sultry dance between Buddy’s parents. Details: 3 out of 4 stars; in theaters November 12.

“The narrowing next door”: Need a new addicting limited series? Look no further than this original Apple TV +. Based on a podcast and inspired by real events, the gripping eight-episode series drops three of its chapters this Friday, and we’re already hooked. Recently crowned sexiest man in the world Paul Rudd has a blast playing the guy as charismatic Dr Isaac Herschkopf, a celebrity-seeking New York psychiatrist who uses unorthodox methods to treat his patients and benefit from them. Enter Marty Markowitz (Will Ferrell), a wealthy but insecure businessman suffering from bad judgment of character and panic attacks. By order of his sister (Kathryn Hahn), he reluctantly visits Dr. Ike and soon he is on a new path to self-destruction. The three main characters and cast couldn’t be more fascinating to watch while the writing and directing is crisp, clever, and filled with ironic little details that later make a big impact. Details: 3 stars ; available November 12.

“Mayor Pete”: Award-winning San Francisco documentary filmmaker Jesse Moss wisely avoids idolizing his topic as he and his team follow one of the most unlikely candidates in the 2020 presidential campaign, Pete Buttigieg, mayor of South Bend, Indiana, who is also a married homosexual veteran. Since Buttigieg is not comfortable with emotion, it is a difficult task to reach the person behind the official. But Moss gets a glimpse of what the new US Secretary of Transportation looks like, especially when he encounters an intimate exchange between Mayor Pete and her husband, Chasten. Moss’s ‘fly-on-the-wall’ approach also takes us to unexpected destinations, from racial strife in Buttigieg’s hometown to his own illuminating and surprising tale of being locked up. It is revealing. Details: 3 stars ; available November 12 on Amazon Prime.

“Beans”: In this uncompromising coming-of-age drama based on real events, a young girl (Kiawentiio) finds herself caught in the midst of a volatile stalemate in 1990 between Indigenous peoples and disagreeing Quebec government agencies. on construction projects on sacred grounds. While director / co-writer Tracey Deer’s account of the 78-day standoff (actual footage is used) provides an enlightening historical context, “Beans” places equal emphasis on creating an intricate portrait and vibrating from a spirited 12 year old Mohawk girl. , and the realities it encounters. It allows for ideal viewing during Native American Heritage Month. But parents should be told that he candidly deals with a variety of issues. Details: 3 stars ; played in select theaters and available on various streaming platforms.

“Hive”: In this multiple Sundance Film Festival winner, also based on a true story, a Kosovo woman (Yllka Gashi) sifts through corpses to see if any of the Kosovo war dead are her husband. Overwhelmed with grief but needing to take care of his family, Fahrije creates a food business supported by other widows but vilified by the men in his village. Blerta Basholli’s film is a sober and ruthless portrayal of a survivor who refuses to bow to ancient traditions. As a storytelling, it’s as good as it gets. Details: 4 stars ; to perform in select theaters, comes to the Smithy Rafael Center on November 19.

“Who passed”: Actress Rebecca Hall’s first film is a lyrical and perfect adaptation of the novel ahead of its time by Harlem Renaissance author Nella Larsen about a reunion of two 1920s friends (Tessa Thompson and Ruth Negga) in New York. Shot in black and white and showcasing electrifying performances, it intelligently tackles tough questions about racial identity, and is also one of the best films of 2021. Details: 4 stars ; available on Netflix.

“7 prisoners (7 prisoneiros)”: Mateus (Christian Malheiros) dreams of a better life, but those hopes are dashed once he leaves his remote Brazilian village for a machine-part demolition gig in Sao Paulo. Once at work, he realizes that he and his friends are now being used as slaves under the thumb of a shady boss (Brazilian star Rodrigo Santoro). Director Alexandre Moratto’s sequel to his gem “Socrates” is captivating, well-acted and strangely like a documentary. Details: 3 stars ; available on Netflix.

“Dash Cam”: Working on a tiny budget, writer / director Christian Nilsson overshadows his better-funded counterparts with this gripping political thriller. It mostly takes place in the apartment of ambitious video editor Jake (Eric Tabach), who tries to get his hands on explosive video footage depicting the murder of a cop and a district attorney. As the pressure mounts, Jake obtains information that contradicts what the original video shows. Nilsson’s ‘Dashcam’ is a tense black experiment that works well until a tire bursts near the end. Details: 2½ stars; available to stream now on YouTube.

“The boy meets the boy”: There’s no way to ignore the influences of Richard Linklater’s “Before” trilogy and Andrew Haigh’s sexy gay romance “Weekend” in 2011 in every setting of the promising debut of Daniel Sanchez Lopez, an indie to. low budget woven around two gay men in their twenties (Alexandros Koutsoulis and Matthew James Morrison) making an instant connection, then spending 48 hours flirting, talking, and removing emotional layers from each other. “Boy Meets Boy” is light on the action and long on the conversation, and that’s good since the dialogue is interesting – enough of the time. Details: 2½ stars; available to stream now on multiple platforms.