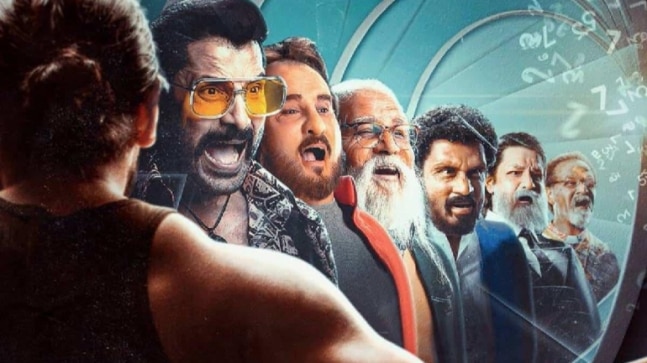 That Chiyaan Vikram is an excellent and dedicated actor is a known fact. With every movie and every outfit he dons in his films, he has proven his mettle. But is that enough to save its latest offering, Cobra? The answer is a big NO.

Madhiazhagan AKA Madhi (Chiyaan Vikram) is a genius mathematician and an assassin. He is so skilful that he leaves no trace, and yet he has contacts all over the world (don’t ask how! You have to believe him). He kills a British king and escapes unscathed. He dons multiple outfits and has multiple passports so he can travel and kill people. Fascinating, isn’t it?

Meanwhile, Scottish Interpol official Aslan Yilmaz (a surprisingly good Irfan Pathan) is after the assassin who killed the British king. Plus, there’s Judy, a mathematician and criminology student, who finds a common link between the murder of the chief minister of Odisha and the murder of the British king. This allows Aslan and Judy to go on a mission to find the genie who left no trace. Will Aslan and Judy succeed? Does Madhi have a past? These answers are discussed in the three-hour film.

Director Ajay Gnanamuthu is an up-and-coming filmmaker. He has fascinating ideas in each of his films. However, execution is where it falters. With a script that seems to be ripped from old MGR, Villain, and Manmadhan movies, it could have delivered a decent thriller by banking on an interesting storyline. However, Ajay Gnanamuthu ends up complicating it with a larger than life canvas.

With Cobra, Ajay thinks he has woven a complex and intelligent story. But, all it does is state the obvious that is already shown in the visuals. Before a so-called ‘snap’ interval, we see Judy discover the element of suspense before the Interpol officer even can. But Judy, you’re late, because we (the audience) could guess it before you. This is a recurring problem in Cobra. The director “tells” us instead of showing us.

Even the intro sequences in Cobra are disappointing. Nellaiappan (KS Ravikumar in a lost role) unnecessarily hypes the hero’s entrance. And the same goes for the other characters who are introduced simply to do this job. Another big problem with Cobra is that it’s pretentious and illogical. The sequences are not organic and everything seems forced. Take, for example, the fact that Madhi de Vikram is diagnosed with schizophrenia. Without consequence to the plot itself, this element seems to have been included only to provide the actor with a canvas to show off his acting skills.

Chiyaan Vikram is an actor par excellence. No doubt about it! But, how long can we watch him put on makeup for hours to get into an outfit that stays on screen for a mere 10 seconds? It would be interesting to see him in solid roles like Saamy and Dhool, which suit him perfectly. That said, he nailed a particular second-half streak that will remind audiences of Anniyan. It’s his acting that makes the film bearable.

Here is the Cobra trailer:

KGF’s Srinidhi Shetty as Bhavana Menon appears in an insignificant role and she also does not improve it with her performance. Meenakshi Govindarajan gets a meaty role, but she’s also ineffective. The performances of Mirnalini Ravi and KS Ravikumar are adequate. Cricketer Irfan Pathan was a total surprise and he did a neat job in his debut film. Among all, it is Roshan Mathew as the villain, who stands out. He gets about half an hour or so of screen time, tries to make the most of it, and succeeds.

Cobra, which has music by AR Rahman, has no moments of silence. Each scene is heavy with Rahman’s thrilling score. Harish Kannan’s photography was perfect for the film, which is mounted on a huge canvas.

Overall, Cobra is a disappointing watch that relies solely on the acting chops of Chiyaan Vikram. So, yes, it hisses but it misses.