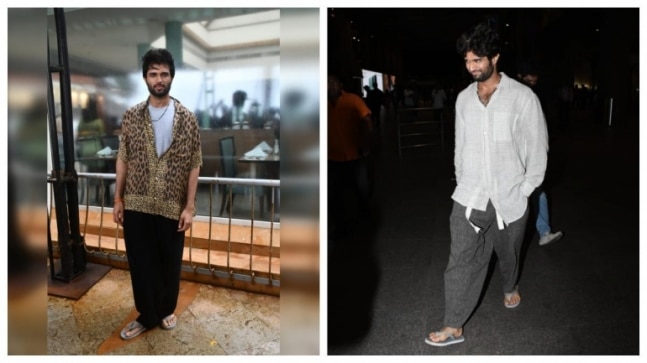 Vijay Deverakonda was spotted wearing chappals during promotions for his upcoming film, Liger. In a recent interview, the Arjun Reddy actor revealed why he shows up in the chappals.

Vijay Deverakonda has made a rather bizarre style statement by showing up in chappals for Liger promotions. The actor toured different cities across India to promote Liger ahead of his big release. In a recent interview, Vijay Deverakonda revealed the reason for wearing slippers with almost every outfit during promotions. And it’s safe to say we agree with the Arjun Reddy actor!

VIJAY DEVERAKONDA REVEALS WHY HE WAS WEARING CHAPPALS FOR LIGER PROMOTIONS

Vijay Deverakonda’s highly anticipated film Liger is gearing up for a big release on August 25th. The film will be released in five languages.

For the promotions, Vijay Deverakonda and Ananya Panday along with the crew attended events across India. What caught everyone’s attention were the Dear Comrade actor’s chappals. However, he had a valid reason for wearing slippers for promotions.

Speaking to The Times of India, Vijay Deverakonda said, “I know it’s a blockbuster (Liger) with Chappals and cross legs… I wear all kinds of things. Jab mood laga kuch bhi phenta hu (I wear you see, 30 days I have to promote the movie and then every day I have to look for shoes and clothes and it will take forever. So, a great chappal that I bought and I makes life easier… So I come and do what I want.”

According to Vijay Deverakonda’s stylist, Harmann Kaur, the actor bought chappals worth Rs 199 as it is closest to his character in Liger.

Liger, directed by Puri Jagannadh, is a sports drama in which Vijay Deverakonda tries out the role of a boxer with stuttering issues. In the film, he was born in a slum and rose through the ranks to become one of the most sought after MMA fighters in India. Ananya Panday, Ramya Krishnan and Ronit Roy play significant roles in the film. Boxing legend Mike Tyson will play a pivotal role in the film. Liger is jointly produced by Puri Jagannadh, Charmme Kaur and Karan Johar.