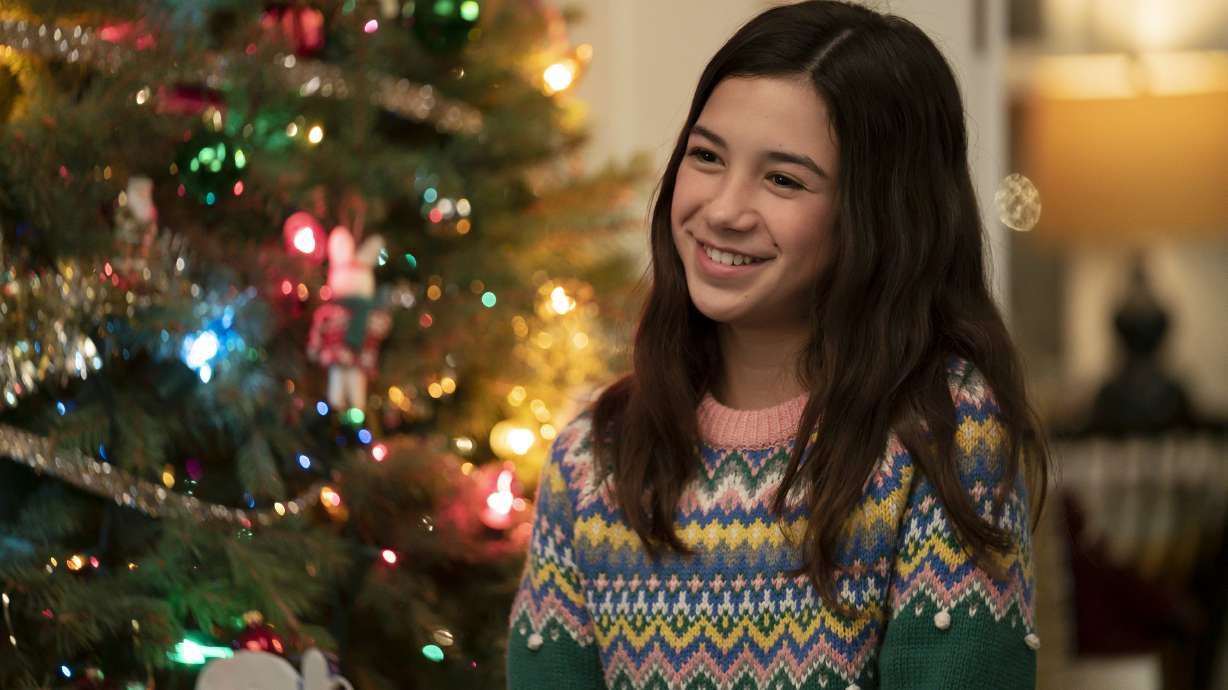 Scarlett Estevez in a scene from “Christmas Again,” a holiday movie that airs Dec. 3 on the Disney Channel. (Jean Whiteside, Disney Channel via AP)

LOS ANGELES – Supply chain woes are this year’s Grinch, threatening to steal goodies and good humor. But the television is chock-full of holiday specials and romantic comedies – including Food Network’s first film and the Christmas debut of the renowned GAC Family channel.

There are options to watch some old favorites, such as the 1965s “A Charlie Brown Christmas.” The Peanuts special will air on PBS and is available on Apple TV +, which acquired the classic in 2020. The free viewing window the streaming service was offering it then has closed this year.

In a twist for the Food Network movie, its debut is about finding a business sibling +. The streaming service offers a free trial option, so like Santa Claus marking courtesy cookies, enjoy the gift while it lasts.

Here’s a sample of what to watch while sipping nog and munching on roasted chestnuts – if available on store shelves. All airtime is in the mountains.

“A rich Christmas”, streaming now on BET +. A self-centered socialite gets a new perspective on life when she is forced to work in a family homeless shelter. Bill Bellamy and Tyler Abron are the stars.

“A benevolent Christmas”, GAC Family (formerly Great American Country), originally aired on November 20. A woman wants to emulate the generosity of her late husband, bringing joy to others and perhaps to herself. Jennie Garth stars.

“A kiss before Christmas” Hallmark Channel, originally aired on November 21. James Denton, Teri Hatcher and Marilu Henner star in the story of a man who gets the alternate life he wanted and tries to give it back.

“Who’s on Christmas Eve?” “ Bounce, originally airing November 21. A young woman (Paige Audrey-Marie Hurd) abandoned as a baby delves into her past with the help of her boyfriend (Romeo Miller) and an investigative genealogist.

“Reba McEntire’s Christmas in agreement”, Lifetime, 6 p.m. Friday, November 26. Georgia (McEntire) and Joe (John Schneider) broke up as a couple and singing duo years ago, but their daughter wants a charity reunion.

“Christmas again” Disney Channel, Friday, December 3. Teenage Rowena is caught living the vacation time and time again after wishing she could get her life back before her parents divorce. Scarlett Estevez stars.

“It’s a wonderful life,” NBC, 6 p.m. Saturday, December 4 and Friday, December 24. Jimmy Stewart stars as a desperate man who finds value in his life with the help of a budding angel, Clarence.

“Our Christmas trip”, Hallmark Movies & Mysteries, 8:01 p.m. Saturday, December 4. Holly Robinson Peete stars as a single mom who faces a new independent chapter for herself and her teenage son with autism. Peete and her husband, former NFL quarterback Rodney Peete, are the parents of a son with autism. The actor said on Twitter that “I’ve been wanting to make a movie about a family with autism making #Christmas transitions for quite some time.”

“The Christmas thief”, ION television, Sunday 5 December at 6 p.m. A novice private investigator, at home for the holidays and trying to solve burglaries blamed on Santa, runs into a local detective. Michelle Borth and Vivica A. Fox co-star.

“Christmas under the stars” BYUtv, 5 p.m. Sunday, December 5 and on the BYUtv app. The a cappella group Pentatonix mixes their favorite tunes and vocals with songs from their new holiday album, “Evergreen”.

“Michael Bublé’s Christmas in the city,” NBC, 8 p.m. Monday, December 6 and Wednesday, December 22. The pop singer is celebrating the 10th anniversary of his album “Christmas” with music and comedy.

“20 years of Christmas with the Tabernacle Choir,” PBS, Monday December 13 and Friday December 24 (check local listing for times). Brian Stokes Mitchell recounts a retrospective of performances by Kristin Chenoweth, Audra McDonald and dozens of other artists.

“Rudolph the red nosed reindeer,” CBS, originally aired on November 22. A reindeer finds being different worth it in this 1964 special based on the song by Johnny Marks and narrated by Burl Ives.

“How the Grinch stole Christmas,” NBC, 6 p.m. Friday, November 26 and Saturday, December 25. The king of horror movies Boris Karloff gave the voice to Dr. Seuss’ infamous Grinch for the 1966 cartoon.

“It was the fight before Christmas”, Apple TV +, Friday, November 26. A documentary about a neighborhood in Idaho that has become a battleground for a man obsessed with large-scale vacations and his enemies, aka other homeowners.

“A house for the holidays,” CBS, 7 p.m. Sunday, December 5. On the 23rd annual show of the special, inspiring stories of young adopted into foster care are paired with performances by pop artists.