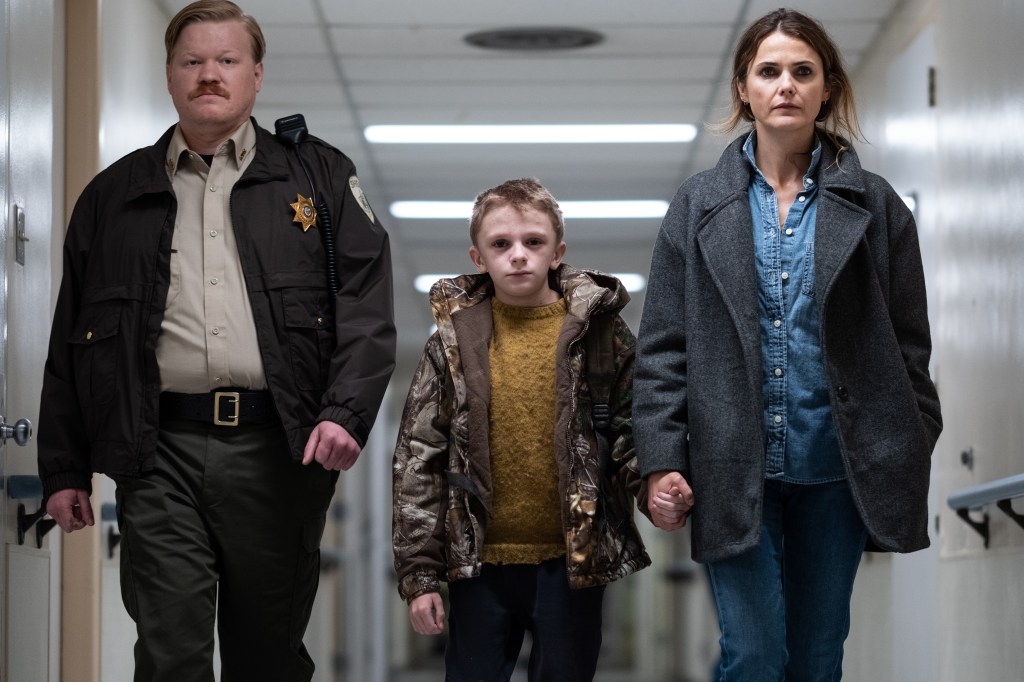 If you love horror movies, get ready for the legitimate nightmare “Antlers,” which hits theaters on October 29. Another interesting – but not nearly as good – release is the black “Last Night in Soho” by Edgar Wright.

And on Netflix, the six-part series “Colin in Black and White” debuts and he’s a talker. The streaming service also offers a sort of nifty prequel to Zach Snyder’s “Army of the Dead” with “Army of Thieves.” There is also a sad story about mental illness which is a difficult but rewarding watch, “A Mouthful of Air”.

Here is our roundup.

” Drink ” : One of the best modern American columnists of the old and new West – Scott Cooper – is teaming up with producer Guillermo del Toro for his entry into the supernatural genre. And oh how it delivers, creating an intense, atmospheric folk tale that stirs the nerves from the ominous start to the violent finale.

Keri Russell reminds us of just what a versatile actress she is, clad in a heavy cloak of desperation and strength as the emotionally suspicious Julia, a recovering alcoholic and teacher who returns to her tiny Oregon hometown that is plagued by an opioid epidemic. It’s not a smooth homecoming as she stays with her sheriff brother (Jesse Plemons) at the same ranch where her father raped her as a child.

While teaching in class, Julia spots something wrong with a shy, bullied and savage middle-aged child (Jeremy T. Thomas, in a difficult but vulnerable performance).

“Antlers” works on several levels. It’s not just a cleverly constructed creature feature with a truly bizarre-looking monster at its center, but also a hard-hitting look at the opioid epidemic and an angry criticism of the disrespect of the America to the indigenous peoples and their land. But above all, it aims to scare you, and that’s exactly what it does. Details: 3½ stars out of 4; in theaters October 29.

“The last night in Soho”: Edgar Wright’s time-traveling noir sets in at first but begins to crumble when he introduces faint tropes of horror. But even 75% of Wright’s great effort makes for an entertaining time at the movies, and “Soho” has its thrills.

The inventive director of “Baby Driver” and “Shaun of the Dead” stars in the toy box Hitchcock, DePalma and Lynch for a trippy tale about the shy peasant Eloise (Thomasin McKenzie) who rushes to the great city of London for qu ‘she can enter a fashion school.

After being humiliated by a terrible roommate, she finds a fairly inexpensive search in a run down building run by cranky Miss Collins (Diana Rigg). At night, something surreal and disturbing begins to happen with Eloise who is brought back to the 60s where she sometimes shadows and inhabits the body of the ingenuous Sandy (Anya Taylor-Joy), a young woman who dreams big and runs into a charmer (Matt Smith).

Wright seems more at ease when he picks up the fashions, styles, songs and settings of the 60s, and tinkers with the strange bond between these two women at “Mulholland Drive”. But when “Soho” takes on horror, Wright gets confused, especially when ghosts that seem to have escaped appeared in “Pirates of the Caribbean.”

The cast, however, are formidable and the soundtrack sensational. And “Soho” offers a killer ending. Definitely worth seeing. Details: 2½ stars; in theaters October 29.

“Colin in black and white”: In this challenging and unconventionally structured six-part series, former 49ers quarterback Colin Kaepernick doesn’t hold back when telling his story, and that frankness and insight serves the project well. But don’t expect to get any further perspective on his 49er status or the national debate he hosted by kneeling down during pre-game national anthems to protest racial injustice. Rather, the 30-minute episodes cover his teenage years in Turlock. It is nonetheless fascinating and incisive, Jaden Michael making a strong impression playing young Colin.

Acclaimed director Ava DuVernay and Kaepernick are executive producers, and he helps with the storytelling, as the story centers on his childhood as a black child of white parents (Nick Offerman and Mary-Louise Parker) in a small town.

The series takes risks and doesn’t always succeed, but it also challenges viewers by asking Kaepernick to break down the fourth wall to issue criticism that includes the way the NFL treats black players in a series that probes racism persistent among whites.

Some episodes are stronger than others, but all of them encourage speaking candidly about race, while also questioning why Kaepernick has received so many letters of rejection, including from UC Berkeley and Stanford. Some of the most revealing moments are the smaller ones: one episode about her getting cornrows is notable, as is the one about her coming home and the winter prom with two different dates.

One can only hope that this will only be the first season. The final episode ends after the University of Nevada at Reno invited Kaepernick to play on their football team. It makes you want more, especially when it’s said in his words. Details: 3 stars ; available October 29 on Netflix.

“Army of Thieves”: In Zach Snyder’s zombiefest “Army of the Dead”, Dieter (played with hyperkinetic glee by Matthias Schweighöfer) managed to outshine an undead dog. It is saying something. Now Dieter and Schweighöfer can choose bigger locks in this sort of prequel.

While an occasional zombie scolds every now and then, they are largely sidelined in this clever heist thriller that uses Wagner’s The Ring Cycle as an essential plot device, with every safe that Dieter and his team choose inspired by this iconic opera cycle.

In the first few minutes, however, Dieter is actually Sebastain, a bank teller in Germany. Her professional status changes when Gwendoline (Nathalie Emmanuel), the mastermind of this heist operation, watches one of Sebastian’s rather sad YouTube videos. She convinces him to be her team’s rescuer. Romantic complications ensue as Gwendoline is with Brad (Stuart Martin), who has watched too much Nicolas Cage films.

The action is fast-paced and the romance is pretty cute with Schweighöfer – who has impeccable comedic timing – and Emmanuel playing himself pretty well.

If you like the “Ocean” movies, you will want to relax with this pleasant diversion performed with a touch of freshness by the talented Schweighöfer. Hans Zimmer’s soundtrack (the new “Dune”) also helps. Details: 3 stars ; available October 29 on Netflix.

“A mouthful of air”: Cinematic representations of mental illness can range from scandalous and hysterical to terribly sad and tragic. Amy Koppelman’s adaptation of her praised 2003 novel falls into the terribly sad category, a beautifully interpreted love story about a struggling mother (Amanda Seyfried) afflicted with postpartum depression. Seyfried’s performance is a revelation. She expresses the inner turmoil that tears Julia with restraint and an awareness of the conflicting emotions that her character feels. American Horror Story regular Finn Wittrock stars as her compassionate but sometimes frustrated husband, a man deeply in love with his wife. It’s a dark story that comes with a warning that it could trigger someone with anxiety and depression. Other performances help make “Air” a tough but vital watch, from Amy Irving to Paul Giamatti. Details: 3 stars ; in theaters October 29.

Criminal charges against Alec Baldwin are not excluded: DA