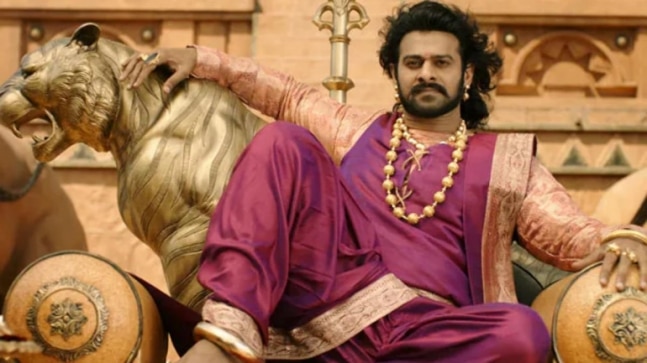 It was a true cinematic experience when director SS Rajamouli introduced his magical kingdom to audiences through his magnum opus, Baahubali. The epic two-part action drama starring Prabhas, Anushka Shetty, Tamannaah Bhatia, Rana Daggubati, Ramya Krishnan among others broke many records upon its release. The craze created by Baahubali: The Beginning and Baahubali: The Conclusion was something Indian audiences had never seen before. The film grossed Rs 586.45 crore worldwide and became the highest grossing film in India at the time of its release. So naturally when we meet Amarendra Baahubali AKA Prabhas, we tend to ask him about his plans for Baahubali 3. During a press conference, IndiaToday.in asked the Radhe Shyam actor if he was ready to do Baahubali 3 if SS Rajamouli approached him.

Prabhas has several movies awaiting release. The first is Radhe Shyam, where he will be seen opposite Pooja Hegde. Radhe Shyam hits theaters on Friday, March 11. Then it has Adipurush, Salaar, Project K and more. After Baahubali, his last release was Saaho, with Shraddha Kapoor. Although the film was widely criticized, it didn’t seem to affect its stardom. Still, fans seem to return to Baahubali every time they see Prabhas on screen. So, we asked Prabhas if it would be open at Baahubali 3 if SS Rajamouli decided to do so. Prabhas simply joked, “No, I need time. I still need some time, after a while maybe.”

Prabhas continues, “Every movie cannot be Baahubali. It [Baahubali] is different. A lot of things worked for the film. There were a lot of firsts, he broke down barriers and so much more. One more Baahubali is too much. Things like Baahubali
only happen once. You can’t expect it over and over again. It’s magic. But having said that, I hope he (SS Rajamouli) does Bahubali 3 (laughs).”

Meanwhile, Prabhas is waiting for the release of his next film Radhe Shyam starring Pooja Hedge. He also has Salaar, Project K and Ahipurush in his chat. While SS Rajamouli can’t wait to release another epic movie RRR starring Ram Charan and Jr NTR.

Court suspends publication of The Kashmir Files by Vivek Agnihotri