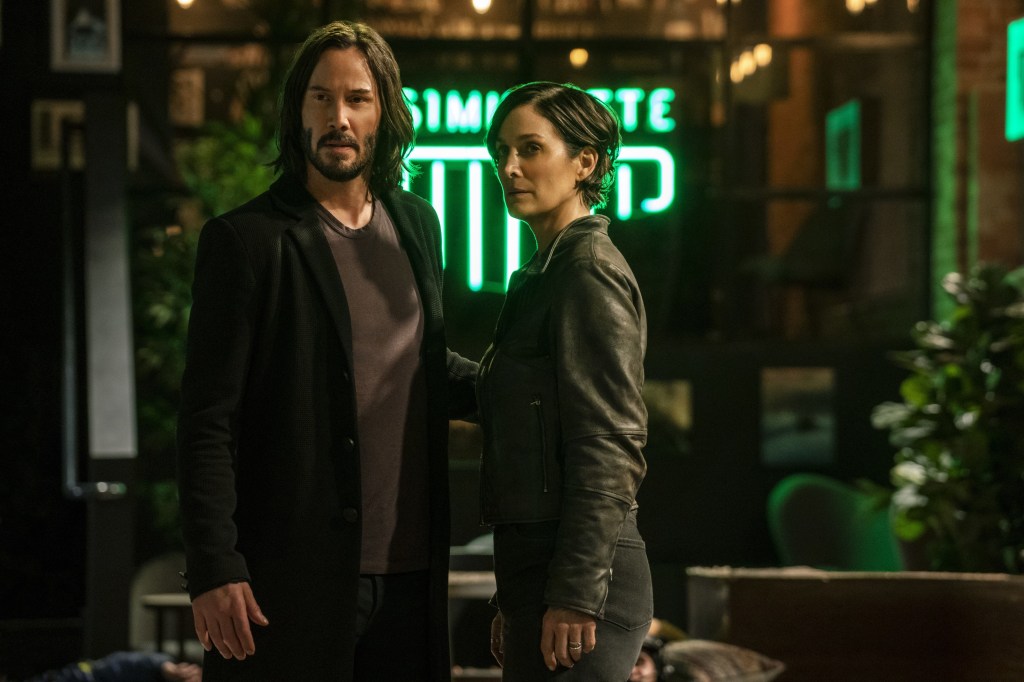 The final film tour of 2021 is upon us and the studios are celebrating by releasing two types of films, those that exist to entertain and others that are meant to win awards and make us think.

“The matrix: recurrences”: Neo suffers from an existential crisis in Lana Wachowski’s new installment in the influential sci-fi series, which adds even more shadow to “Resurrections.” This franchise update plays like the best in fanfiction, a heartfelt and shameless “I love you” to its iconic characters and the series’ fan base. What it does best is shake up expectations by being above all a subversive middle-aged romance, a rarity in this genre of film in which the lovebirds tend to be mostly young.

“Resurrections” opens with depressed sci-fi game designer Thomas Anderson / Neo (Keanu Reeves) shaking off his unease as he ventures back into the Matrix. With the help of Morpheus (Yahya Abdul-Mateen II, replacing with flamboyant fanfare for the author of the role Laurence Fishburne) and Neo fangirl Bugs (Jessica Henwick), a transformation happens in this world, which the director and co-writer Wachowski delivers with relevance, nuance and deeper meaning.

“Resurrections” alternates between the alternate world of the Gamey Matrix and the real world, and Wachowski’s adventure, shot primarily in San Francisco, is most exhilarating in a few wowza action sequences in the city as well as in its history of love between Neo and Tiffany / Trinity (Carrie-Anne Moss). The duo make sweet romantic music together, and it’s satisfying to see them on screen again.

Of course, there are Easter eggs everywhere, and if you’ve never seen the show, you won’t know what’s going on. Pity. “Resurrections” isn’t for novices, it’s for fans.

Even then, the storyline relies too much on its meta-ness. Fortunately, this insider intelligence is often great, and the old woven movie scenes create a feeling of green nostalgia. Reeves and Moss dynamics remain as strong as ever, but the cast’s best surprises are Jonathan Groff as the dubious boss of Neo and Abdul-Mateen, the former Bay Area resident and UC Berkeley graduate, who owns every scene it’s in. “Resurrections” may not compare to the original movie, but it’s a lot of fun. A word of advice: watch the first “Matrix” again, then stay put for the end credits. There is a little cute at the end. Details: 3 out of 4 stars; opens December 24 in theaters and on HBO Max.

“Liquorice pizza”: Paul Thomas Anderson is at his best in this curvy coming-of-age drama that’s a joy throughout. It follows the groping romantic misadventures of 1973 of a confident San Fernando Valley teenager (Cooper Hoffman) and an inert young woman (Alana Haim). The lead roles – he’s the son of the late Philip Seymour Hoffman, she’s a part of the popular pop-rock group Haim – bring laid-back charisma to their goofy duo, while Bradley Cooper as the enraged Jon Peters and Sean Penn as the Actors à la William Holden are hilarious in the small roles. “Pizza” is unlike most coming-of-age comedies, reflecting good times and bad without ever preaching. It is filled with a feeling of brutally honest longing. Details: 3½ stars; in theaters December 24.

“The Tragedy of Macbeth”: Joel Cohen’s bare-bones vision of Shakespeare’s tragedy is bound to irritate some purists. Regardless, this surreal rendition succeeds where others have failed due to its conception of production, which creates wacky and crazy B&W landscapes and nightmarish castles à la Grand Guignol. Central to the hustle and bustle of this gloomy, brooding mood is a contorting witch (an unforgettable Kathryn Hunter), one of three, who see problems ahead like the over-ambitious Scottish General Macbeth (Denzel Washington) and his playful wife Lady Macbeth (Frances McDormand, who played Lady Macbeth in a Berkeley Rep production in 2016) has set her sights on the crown. The trails are great, but Cohen’s vision is distinguished by its unsettling, haunting and alluring atmosphere. Details: 3½ stars; in theaters on December 25; streaming January 14 on Apple TV +.

“Do not search”: There’s a lot to admire about the first half hour of Adam McKay’s bitter satire spitting silly politicians, climate / science deniers, the mundane jokes of audience-obsessed TV hosts, of complex entrepreneurs, nutcase conspirators and celebrities with a cause. McKay’s prison-less filming style has to be appreciated, but it’s not as good as his “The Big Short”. “Look Up” has an interesting premise, as a highly intelligent Michigan doctoral student (Jennifer Lawrence) and professor of astronomy (Leonardo DiCaprio) sounds the alarm about a comet rushing towards Earth. But their warnings cannot gain ground in the ever-changing news / spin cycle. Even a populist Trump-esque president (Meryl Streep) and her poo-poo team are revealing the end of the world. As a screenwriter, McKay hits the nail on the head more often than his previous and terrible American pullout, “Vice.” But he must better exploit his mad nature to develop a better basis for his ideas; a strong co-writer would have helped. The cast, however, is divine with Lawrence and DiCaprio doing some of their best comedic work and Cate Blanchett showing everyone off with her perfect, perfect portrayal of a tasteless news anchor. “Don’t Look Up” is good, but it could have been so much better. Details: 2½ stars; available December 24 on Netflix.

“Sing 2”: This fast-paced, jovial family song brings together most of the original’s A-list actors (Matthew McConaughey, Reese Witherspoon, Taron Egerton, Scarlett Johansson) to voice and sing their adorable angsty animal characters. The result is another instant charmer for overcoming fears and putting yourself in the spotlight that the whole family will love. He barely reinvents the animated film, but the visuals and musical performances are irresistible, as koala promoter Buster Moon (McConaughey) makes his way into a Vegas-style show while trying to coerce his promised star attraction. , a lion (voiced by Bono) of retirement. It builds up to the Big Show, and it’s a nonstop karaoke night. Writer / director Garth Jennings’ colorful confection is meant to make you smile and sing, and feel great afterwards. The scene thief, however, remains Miss Crawly, Buster’s senior assistant who knows exactly how to get the job done. It is a pure delight. Details: 3 stars ; opens December 22 in theaters.

“The tender bar”: One of the nicest surprises of the holiday movie rush is George Clooney’s smooth and satisfying adaptation of the beloved 2005 memoir by East Bay journalist and author JR Moehringer. He doesn’t do anything groundbreaking with his well-written true story, but it’s the story of an impressionable and likeable child / young man who has an influential uncle and a deadbeat, out of the ordinary dad. Tye Sheridan makes a good teenage and adult JR, a stranger who idolized his uncle Charlie (well played by Ben Affleck) who nurtured his love for books and storytelling. Clooney’s film is a sympathetic experience that too often consists of sitcom-type banter between family members living under the same roof in a dilapidated Long Island house. But you can forgive all of that since the adaptation of Clooney is still entertaining and goes smoothly with a good taste of nostalgia. Things speed up every time JR ventures into Uncle Charlie’s bar, The Dickens. Details: 3 stars ; in theaters December 22, streaming January 7 on Amazon Prime.

“An American outsider”: In this well-done, crowd-pleasing biopic, the story of former Los Angeles Rams quarterback Kurt Warner is told with all the emotion and constant respect for the power of faith it deserves. Immensely sympathetic “Shazam” Zachary Levi marks a decent native of Iowa, and not only is he a lookalike for Warner, whose footballing career has taken a long, winding path to the pros, but he also draws on the decency of an athlete who as a child he idolized 49ers QB Joe Montana. Why “Underdog” is a cut above other faith-based features, a genre that can be judgmental and tie things together too carefully, is it written and directed by the brother team of Andrew and Jon Erwin, who both know how to make convincing cinema. “Underdog,” however, is swept into the end zone by its cast, which includes Anna Paquin working her magic as Warner’s strong and pragmatic love / wife and Dennis Quaid as Warner’s support coach. Details: 3 stars ; in theaters December 25.

“Mother / Android”: As touching as its personal story is, this bizarre apocalyptic survival thriller lacks thrills and even elicits unexpected laughs at what are supposed to be its most poignant moments. And that’s a shame because there is a story worth telling about motherhood here, and the cast is worthy of bringing that idea to fruition. Chloe Grace Moretz plays the pregnant Georgia who, along with her boyfriend Sam (Algee Smith), travels to Boston so she can go after the AIs who blew up a joint and want to kill all humans. There’s nothing new here, and AI history is overshadowed by a moral pickle about parting from your loved one to save your newborn baby. None of this merges as it should, although Raul Castillo brings a necessary air of uncertainty as someone the couple meet along the way. Details: 1½ stars; now streaming on Hulu.

Disha Patani to Perform Her Own Stunts in ‘Yodha’ | Movies News