Priyanka Chopra hailed Writing With Fire for its Oscar nomination.

Writing With Fire, a documentary about Dalit women journalists, recently won an Oscar nomination that made India proud. The Academy of Motion Picture Arts and Sciences named the Indian documentary in the Best Documentary Feature category when announcing the 94th Oscar nominations on February 8. The makers of the documentary have now received a special congratulations from Priyanka Chopra. The actress took to social media today, March 11, to praise Writing With Fire.

Indian writing with fire was nominated for an Oscar on February 8. Priyanka Chopra Jonas shared the poster for the documentary on her Instagram Stories today and wrote, “Loved this movie! Kudos to the team @writingwithfire.film (sic)” along with a cheering emoji. She later wrote : “Congratulations on a well-deserved Oscar nomination! @kl_meera @suneetaprajapati7 @rintuthomas @mentalsyrup (sic).” For the uninitiated “Writing With Fire” is an Indian documentary directed by filmmakers Sushmit Ghosh & Rintu Thomas. 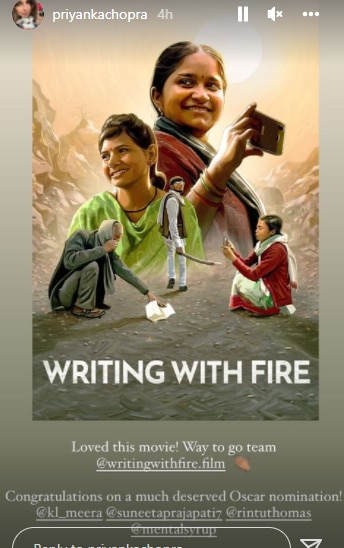 Indian Writing with Fire was nominated for Best Documentary Feature alongside Ascension, Attica, Flee and Summer of Soul (…Or, When the Revolution Could Not Be Televised). The official Oscars Twitter account also shared Team Writing With Fire’s reaction to the nomination announcement.

Oh my God!!!! Writing With Fire has just been nominated for @The Academy Award. Oh my God!!!!!!!! #OscarNames #WriteWithFire pic.twitter.com/X9TlcCF2Xd

Directed by rookie directors RIntu Thomas and Sushmit Ghosh, Writing With Fire follows the rise of India’s only newspaper run by Dalit women, Khabar Lahariya. Led by their chief journalist, Meera, Writing With Fire tells the story of this group of ambitious Dalit female prodigies as they transition from print to digital in today’s changing times.

ON THE WORK FRONT FOR PRIYANKA CHOPRA

On the work side, Priyanka Chopra was last seen in The Matrix Resurrections with Keanu Reeves. Next, the actress has three projects in sight – two in the West and one in India. The actress will be seen in Citadel and Text For You. Back in Bollywood, she will work for the first time with Alia Bhatt and Katrina Kaif in Farhan Akhtar’s film, Jee Le Zara.