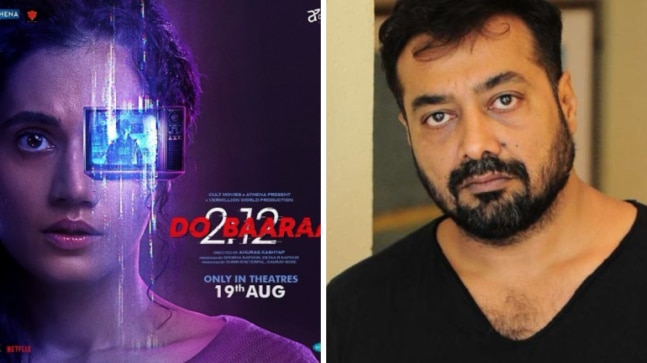 After the ‘Boycott Laal Singh Chaddha’ trend on Twitter, the cancel culture is back after netizens started the ‘Cancel Dobaaraa’ trend on Twitter. Directed by Anurag Kashyap, the film stars Taapsee Pannu in the lead. Ahead of the film’s August 19 release, “Cancel Dobaaraa” became the number one trend on Twitter. It comes after Taapsee and Anurag told IndiaToday.in that they want their movie to trend with the boycott hashtag like current Bollywood movies.

Directed by Anurag Kashyap, Dobaaraa stars Taapsee Pannu in the lead. While the time travel thriller was already catching eyes due to its unique concept, the film has now been added to the list of current trending Bollywood cancel culture. “Cancel Dobaaraa” is now a top trend on Twitter, with netizens slamming Anurag, Taapsee and the movie.

One Twitter user wrote, “Boycott this movie, she does it every time and we can’t accept #CancelDobaaraa
@anuragkashyap72 @taapsee (sic).”

Boycott this movie, she does this every time and we can’t accept #CancelDobaaraa @anuragkashyap72 @taapsee pic.twitter.com/2FYsHI1N32

Another Twitterati posted, “You should all boycott such a movie, this movie is not worth releasing. #CancelDobaaraa @anuragkashyap72 @taapsee (sic).”

You should all boycott such a movie, this movie is not worth streaming.#CancelDobaaraa @anuragkashyap72 @taapsee pic.twitter.com/MRgYdy3mOH

WHAT DID TAAPSEE, ANURAG SAY ABOUT BOYCOTT FILM CULTURE?

In an exclusive chat with India Today.in, Taapsee Pannu and Anurag Kashyap talked about their take on the new boycott trend prevailing in Bollywood. Giving the question a humorous twist, Taapsee told us, “Please everyone boycott our movie, Dobaaraa. I want to be in the same league as Aamir Khan’s Laal Singh Chaddha and Akshay Kumar’s Rakshabandhan. I feel left out. Anurag also added, “Yes please I want our movie to trend on the boycott hashtag as well.”

They also wondered if the people who talk about boycotting and canceling culture are part of the real audience for their films. “I want to know if these people who call for the boycott are those who even watch movies in the cinema?” asked Taapsee and Anurag.

Starring Taapsee Pannu, Dobaaraa is directed by Anurag Kashyap and produced by Shobha Kapoor and Ektaa R Kapoor’s Cult Movies, a new wing under Balaji Telefilms and Sunir Kheterpal and Gaurav Bose (Athena). The film will be released in theaters on August 19.

ALSO READ: Taapsee Pannu Says ‘Her Sex Life Isn’t Interesting Enough’ To Get Her On Koffee With Karan