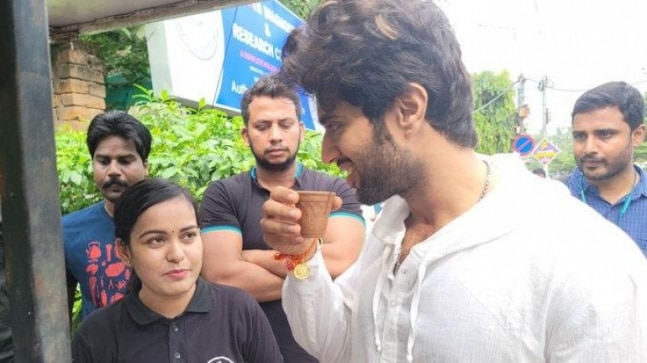 Vijay Deverakonda with Priyanka Gupta who runs the Graduate Chaiwali stall in Patna.

Vijay Deverakonda is in full promotion for his next film, Liger. The actor is currently in Patna, Bihar where he was spotted sipping his morning tea at the famous Chaiwali graduate stall. This morning, Priyanka Gupta, who runs the Graduate Chaiwali teahouse, may have been pleasantly surprised when Vijay Deverakonda popped into her shop for her morning cuppa.

On Saturday morning (August 6), Vijya Deverakonda shared Liger’s new song Aafat. He was later spotted at the Graduat Chaiwali teahouse in Patna. Footage of his visit to the place has gone viral where he is seen having tea at akulhad and chatting with Priyanka Gupta, the economics graduate who runs the teahouse.

Here are photos and videos of Vijay Deverakonda at the popular teahouse:

Liger is a sports drama that stars Vijay Deverakonda as an underdog who succeeds in combat sports despite facing many challenges in his personal life. Ananya Panday, last seen in Gehraiyaan, will make her Tollywood debut with the film. The biggie also features Ramya Krishnan, Ronit Roy and Makrand Deshpande in key roles. Legendary boxer Mike Tyson will be seen in a cameo appearance in the film. Liger is set to open in theaters on August 25.

Economics graduate Priyanka Gupta opened a tea stall after failing to find a job after graduating. Priyanka graduated in 2019. But she couldn’t find a job, which made her consider other options. She decided to open her tea stall near the Women’s College in Patna.

WHAT’S NEXT FOR VIJAY DEVERAKONDA?

Post Liger, Vijay Deverakonda will star alongside Samantha Ruth Prabhu in the romantic comedy Khushi, which is slated for theatrical release on December 23. He also has Jana Gana Mana (JGM), his second film with Puri Jagannadh, in his kitty. The film stars Pooja Hegde in the lead role and marks his first collaboration with the actor.